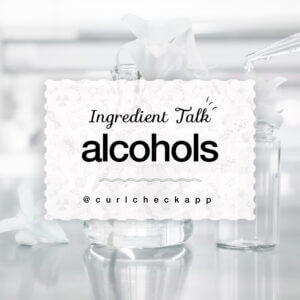 The Truth About Alcohol-Free Products

Choosing the wrong product can result into either dry and frizzy hair or soft and conditioned. Let us help you with this.

The degree of how ingredients, such as alcohol, affect your hair depends on the structure of the alcohol. Fatty alcohols such as lauryl, myristyl, cetearyl, cetyl, stearyl, and behenyl are the good guys. Diving deep into the science, these alcohols are larger and are typically derived from natural resources. Relatively, the good guys have more carbons allowing them to be used as an emollient that is responsible for the oh so smooth and soft feeling of the hair shaft.

Now the bad guys we don’t want anywhere near our curls are the short-chain alcohols such as ethanol, SD alcohol, alcohol denat, and propanol. Compare to the fatty alcohols, these bad guys have lighter weight and evaporate in a flash creating dry and frizzy hair, even roughened some times.

Many alcohol-free products would appear to non-scientists to actually contain alcohols, as close examination of the ingredient list may reveal compounds such as phenoxyethanol, cetyl alcohol, benzyl alcohol or many other variations. Strictly speaking, the products are “ethanol-free”. The old term for ethanol was ethyl alcohol – hence the use of the word “alcohol”. But as consumers we don’t know that and we assume that “alcohol-free” means it’s free of the “bad” alcohols we know to be damaging for our curls.

To prevent the ethyl alcohol in a cosmetic from being diverted illegally for use as an alcoholic beverage, it may be “denatured.” This means that it contains an added “denaturant” that makes it undrinkable.

Denatured ethyl alcohol may appear in the ingredient listing under several different names. You may see the abbreviation SD Alcohol (which stands for “specially denatured alcohol”), followed by a number or a number-letter combination that indicates how the alcohol was denatured, according to the formulary of the United States Bureau of Alcohol, Tobacco, Firearms and Explosives. Among the specially denatured alcohols acceptable for use in various cosmetics are SD Alcohol 23-A, SD Alcohol 40, and SD Alcohol 40-B.

The term “Alcohol Denat.” was introduced in Europe as a generic term for denatured alcohol in the interest of harmonizing ingredient names internationally. It frequently appears on products that are marketed both in the U.S. and abroad. You also may see a dual declaration, such as “SD Alcohol-40 (Alcohol Denat.)

Make sure to read the ingredients list first! Don’t get into the whole “alcohol free” craze just yet. Keep in mind that personal care and cosmetic products use this label now a days despite their products still containing the same exact ingredient we don’t want anywhere near our hair.